Accurately Simulating Movement of a Tracked Vehicle in 2D Space

by Rob Earl on September 20, 2010 in category UI Development
Tweet 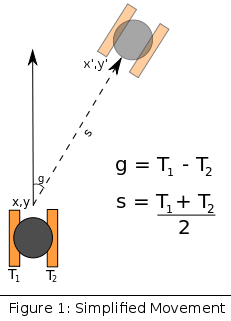 As part of a simulation I’ve been developing I recently had to decide how to model movement of vehicles within a 2D space. To keep things simple I settled on a tracked vehicle. Each time the simulation updates I calculate how much the vehicle rotates and how far it moves based on the speed of it’s tracks. From there I calculate the new coordinates for redrawing the vehicle.

Knowing the current location (x,y) and heading (h) I initially adopted a simplified way to calculate the rotation (g) and speed (s) based on the speed of the vehicle’s tracks (T1 and T2) (Figure 1). With these variables I create a right angled triangle and use maths to calculate how far the vehicle moves in the x and y coordinates in order to find it’s finishing location (x’,y’).

This method is a reasonable approximation for the movement of a tracked vehicle: It’ll move faster when you expect it to and it’ll turn faster when you expect it to. However, as a stand up mathematician pointed out to me, it’s not an accurate representation of what should actually be happening. I had also observed vehicles having problems turning to face something close to and behind them resulting in endless circling of the target.

A more accurate representation is the vehicle travelling a distance, s, along the circumference of a circle who’s radius can be calculated based on T1, T2 and the distance between the tracks (2d) (Figure 2). 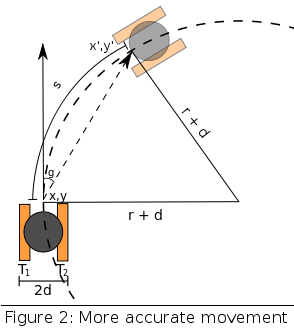 Solving this for r gives us:

We now have a triangle with 2 sides of known length. If we divide this triangle in half we can use the right angles to determine the vehicle will move 2g radians around the circle (Figure 3). 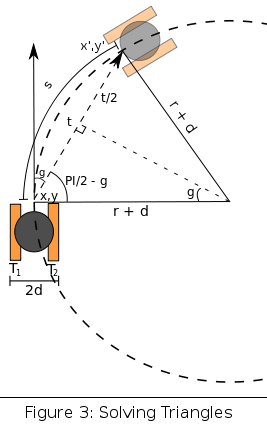 If we substitute in our value for r and simplify we end up with:

Which is a fairly simple calculation that scales by the size of the organism. The other thing missing from the approximate calculation is that the change in heading is actually 2g, as can be seen from the symmetry in our diagrams.

Now that we know the angles we can use the Law of Sines to calculate the straight line distance, t, between our vehicle’s start and end points.

Once again we can substitute in our value for r and simplify to get:

Now that we know the distance and we know the angle we can use the same method we used earlier to calculate the new coordinates:

So far we’ve seen a lot of (possibly confusing) numbers and symbols but what do we actually have to do do add this to a simulation? Each time our vehicle updates we need to:

You may have noticed there’s a possible division by zero error when T1 equals T2. To protect against this we can check if they’re equal (or catch the exception) and use the calculation:

Let’s say our vehicle has the properties:

After this update our new state is:

In the following Java example the Vehicle’s update method would be called from the main program loop.

When updating the x coordinate we subtract because, when using a JPanel:

Inverting the wave ( multiply by -1 ) produces the correct behaviour.

How Much Difference Does It Really Make?

The accuracy of the basic method decreases as the section of the circle traversed in one increment moves further from a straight line. Therefore, it decreases as: 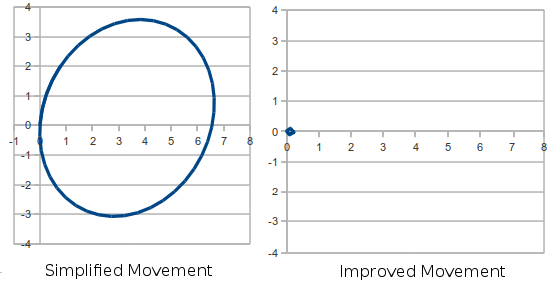 To demonstrate just how much difference there can be I’ve used a fairly extreme case to produce the charts opposite:

As we can see a vehicle turning in a tight circle at a fairly high speed has a much bigger turning circle using the approximate movement calculations than when using the improved calculations.

As the size of the vehicle is now taken into account we can make a vehicle less nimble with a larger turning circle simply by increasing it’s size. We can get a turning circle like the one below by increasing d to 60 without any need to introduce extra variables to clamp the rotation rate. 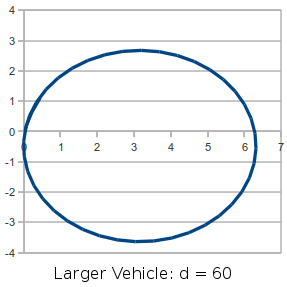 The other difference which is fairly hard to quantify is that the vehicle movement was much smoother once the new calculations were implemented. This could be because the initial technique caused lots of over-rotating which required constant readjustment.