by Brian Davis on December 22, 2013 in category Windows
Tweet

Installation was quick and painless until the very end when I received a message stating that the installation was unable to enable Hyper-V. When I tried to enable it manually by going into Control Panel -> Programs & Features -> Turn Windows Features On or Off, the Hyper-V Platform checkbox was grayed out. Upon hovering over the check box I received a tool tip stating “Hyper-V cannot be installed: A Hypervisor is Already Running”.

At this point I was confused as I had previously installed VS Express for Windows Phone on another VM and had successfully run it along with the emulator (the emulator runs in Hyper-V). Because of this I knew the VM host machine was correctly setup to allow VM Workstation to run virtualized environments within VM’s. I then compared the two VM’s and found there were a few differences:

After reviewing the two VM’s I realized there must be something different with either the latest version of VS Express for Windows Phone, Windows 8.1, or both. Doing a little more research I found there were two things I needed to do:

After doing both of these I started the VM and intended to go back in and turn on Hyper-V, however, when I got back to the settings I was happy to see that “Hyper-V Platform” was already enabled. 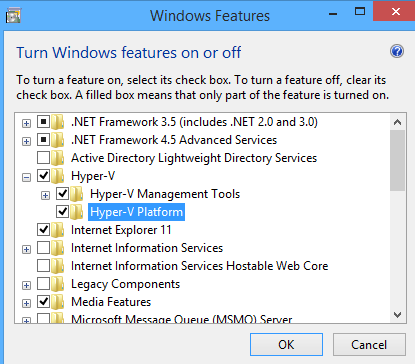 With Hyper-V successfully enabled and running I was then able to run VS Express for Windows Phone along with the Windows Phone Emulator.

By the time I was finished with this, Update 3 had successfully installed on my phone and I was ready to go. Now, not only do I not have to wait for AT&T to release updates, but I can start developing apps for my phone as well. Now I just need to find the spare time and start developing!

Brian Davis is SQL Server Consultant at UpSearch. He has over 15 years in the IT field in multiple areas including software development, support, user training, and as a SQL Server DBA. He has been working with SQL Server since 2003 and has hands on experience with SQL Server 2000/2005/2008/2008R2/2012. Brian is an active member of the Ohio North SQL Server User Group (ONSSUG) and PASS. Brian resides in Cleveland, OH with his wife and 2 boys.
Social Sitings