I think Twitter is a valued resource and I take it seriously when telling other professionals that they should be utilizing it.  At times, the day requires the comedy and relaxing feel that we can get from people that understand the work that we do day in and day out.  Other times such resources like the SQLHELP hash tag are absolutely crucial to problems that need several minds turning in order to resolve problems quickly. Other great uses are things such as marketing your blogs, books, magazine publications and even promotions or career changes, opportunities…there really is no end to it.

1)      I like comedy but I also use twitter as a professional resource. So if I see 10 straight days of just jokes, it may not get a follow.

Full name, Accomplishments, personal side with the husband, father and well, he’s like me and a goofball.  This is crying to be followed.

Don’t take that as saying if you aren’t a goofball you won’t get followers.  Just try to relax but not to the point you are ONLY a goofball.

3)      Your twitter page.  I really don’t need to say much about this because, well, someone actually took time to write a book on it.  I’m guessing all of this is in there as well but I recall the twitter page was really a point.  Go check it out on BrentOzar.com.  Something simple like my page is more than enough but shows a little about yourself  http://twitter.com/onpnt

4)      Don’t be a so rude that it’s just annoying. Don’t overuse cursing either.  Yes, saying ass once and awhile is not bad. But dropping a F Bomb on twitter won’t get you Mr. or Ms. Twitteruniverse

5)       Avatar! I’ll admit that I rarely follow someone with those default avatars.  Take 5 minutes to think of something to portray you.

6)      Tweet!  I’m not saying to not work all day and just tweet 100 times but show some interest in it. Once or twice a day maybe? Even once or twice a week with some content that is valued to SQL Server community. Something!!!

7)      Politics and Religion.   Those are touchy subjects no matter which way you look at it.  There are twitter areas for them. I like to use twitter for the SQL Server Community so I don’t care to see a lot of tweets that are nonstop, just about this.  We do have conversations about both and that is great but I think most SQL Server Community peeps will agree, we are here for SQL Server.

8)      Use Twitter to better work! Yes, take advantage of #sqlhelp, #sqlblog, #sqlt2day and on to build your skills and communicate with the likes of SQL Server Professionals around the world.

9)      Don’t get mad if people do not follow you back right away and you meet all of this.  Some have time to keep up with the new followers list but if you are like me, it is a once a month thing to check them out.

10)   Finally, no one will care that you are just starting out with SQL Server. We all start somewhere and I know that I for one, don’t care where you are with learning SQL. I’ll hang out with everyone, afterall I picked  @SQLSarg as my example here.  And he wears pink superman shirts while presenting! 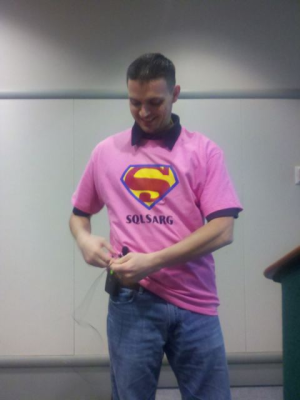