by Ted Krueger (onpnt) on August 8, 2011 in category IT Processes
Tweet 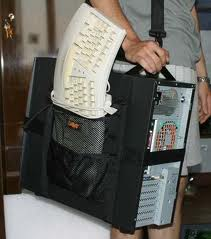 As I was cleaning this past weekend, I did inventory of hardware that was floating about the house and it turns out that I have four laptops and one desktop. The desktop that I still have is one that I built around four years ago. It is up in the guest room primarily used by my two sons for school and games. This started me thinking about where we are today with computing, and desktop computing specifically. Five or so years ago, a laptop was far under powered in all areas of resources to handle running the number of instances of SQL Server and or Virtual Machines that come with the typical SQL Server Professionals daily routine of learning and testing. You could go out and spend $4000 to get a laptop that was 5 inches thick and would burn the hair off your legs, but we're being realistic for the normal geek here. Today, we have it a bit different. At a reasonable price of $1000, you can go out and purchase a solid laptop with enough disk, CPU power and memory to successfully install, configure and run SQL Server Developer. Add a few hundred to that and you are running SSD drives for your data and log files and you are screaming fast in a lot of areas of SQL Server loaded on a laptop.

Not only can you run this successfully but you can run it and properly gauge a performance baseline by creating a simple formula from the laptop executions and port them to server hardware. Now, that in no way is a replacement of a well formed landscape consisting of a Development, Test, User Acceptance Testing and Production transport system. Really, about the only problem you have to worry about are burns from the laptop if you actually leave it on your lap.

So why buy a desktop?

I hear the arguments coming in...I can pack a desktop full of more memory, disk and dual physical processors and...

OK. You can do that and I've built such desktops. But, do you need it? Nope. I'm walking proof of that. I run seven SQL Server instances from a laptop and VMWare Workstation running a few more virtual machines. This is all for writing, testing, learning and presenting. This is being all done without much, if any, problems in the overall speed of my laptop. The laptop is a more expensive one. I think around $1700. But it is still less than the cost of building that desktop mentioned earlier.

There it is: Desktop Computing is dead!

Desktop Computing is so dead that most people I know that really need to beat on SQL Server or other server related software, run servers at home for it. Yes, servers can really be cost effective and in a lot of cases, you can pick a decent Gen 2 or 3 servers up for the same price, again, as the monster desktop you would have to build.