Daemon by Daniel Suarez is a book every programmer will love

by SQLDenis on January 6, 2010 in category Ethics and IT
Tweet 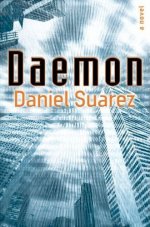 I was tagged by onpnt in his Goals for 2010 post. One of my goals of this year is to read more books. Right now I am in the middle of reading Daemon by Daniel Suarez.

According to his bio Daniel Suarez is an independent systems consultant to Fortune 1000 companies. He has designed and developed enterprise software for the defense, finance, and entertainment industries. An avid gamer and technologist.

You can tell that this book was actually written by a person who worked as a programmer, it wasn’t just written by someone who did some research about technology. Interestingly Daemon was originally self-published in 2006 under the name Leinad Zeraus.

Here is in short what the book is about: Gaming genius Matthew Sobol, the 34-year-old head of CyberStorm Entertainment, has just died of brain cancer, but death doesn’t stop him from initiating an all-out Internet war against humanity. When the authorities investigate Sobol’s mansion in Thousand Oaks, Calif., they find themselves under attack from his empty house, aided by an unmanned Hummer that tears into the cops with staggering ferocity. Sobol’s weapon is a daemon, a kind of computer process that not only has taken over many of the world’s computer systems but also enlists the help of superintelligent human henchmen willing to carry out his diabolical plan.

I only read about half of the book and I can already recommend it to all our readers here; if you like technology you will love this book. If you like to read Michael Crichton books then you will love this even more because this book goes into so much more detail than Crichton ever did. The characters are more complex and real and the storyline is much richer. If you have read Dan Brown’s Digital Fortress then you will like this also better. Digital Fortress is a book I actually liked but it has some horrible reviews and the ending was really weak in my humble opinion.

Daniel Suarez has signed a deal with DreamWorks for the film rights, hopefully the movie will be as good as the book.

The first 7 chapters of Daemon are available here: http://thedaemon.com/daemonpreview.html

The follow-up to Daemon titled Freedom has also just been published, you can find that book here: Freedom