by Koen Verbeeck on July 16, 2013 in category Book Review
Tweet

To prepare myself for my session Data Visualization Tips & Tricks, I read a few books. In this blog post, I'll give a short review for each one of them.

This book, written by Stephen Few, was the first one I read. And it was a fascinating read! I went through the book in one long haul. It's very well written and the design of the book is very well done. A big plus is that the printed version of the book is in color.

The essence of the book is on how to design dashboards properly. In the first chapter, you obviously get an introduction and a few examples of poorly designed dashboards. In the second chapter, Stephen defines the concept of a dashboard and the different variations that exist. For example: how does an operational dashboard look like in contrast with an analytical dashboard. The third chapter goes into detail about what you should not do when designing a dashboard by presenting 13 common mistakes. Chapter 4, one of the most interesting chapters delves into visual perception and explains what you can do to draw attention to certain parts of a dashboard. This involves a wee bit of psychology and worth knowing when designing dashboards.

Chapter 5 demonstrates the principle of eloquence through simplicity, or in other words: keep it simple stupid. It talks about how to reduce the “noise” in a dashboard so that only the important aspects remain. Chapter 6 gives an overview of available chart/display types and presents the bullet graph – invented by Stephen himself – which is a very efficient display medium. Chapter 7 talks about usability of your dashboards and chapter 8 brings it all together. In this final chapter Stephen gives a few examples of how to design a few command dashboards according to his vision. Here he also gives yet another few examples of very bad designed dashboards to illustrate his points.

I absolutely recommend this book to anyone who considers reading about data visualization in general. Every self-respecting BI professional should have read this book. The only criticism I can come up with is that the book focuses a lot on “the bad”, or how not to do things. Perhaps a little bit more focus on how to design properly would have been welcome. But overall, a very great book. In August 2013 a second edition of the book should launch, and I definitely will keep my eye on that one. 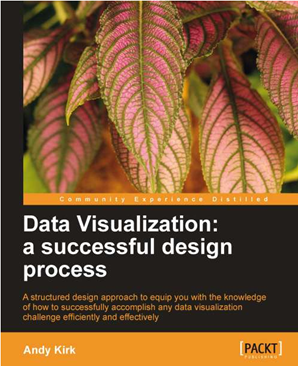 The second book I read was written by Andy Kirk (blog | twitter), who also gives training classes about data visualization. In contrast with the previous book, this one talks about the design approach on how to create visualizations. In other words, it describes a project-based methodology on how to tackle the process of creating a visualization. This might make the book a bit more “dry” to read, but that doesn’t make it less interesting.

The first chapter deals about the context of data visualizations and serves as a general introduction. Chapter 2 talks about setting the scope – or intent – of your visualization project and the different roles that exist in such a project. The 3rd chapter is about finding the right story (editorial focus) and explains the importance of preparing your data. Chapter 4 delves into various design choices, such as choosing the right visualization method and goes for example into detail about color usage. This chapter has quite some similarities with some chapters of Stephen Few’s book. Chapter 5 gives a very extensive overview of different chart/visualization types. The final part, chapter 6, touches the concept of evaluating data visualizations and gives a whole bunch of links to designing tools, resources about data visualization et cetera.

It was a nice book to read and because of the process-based approach of the book it’s something completely different then Information Dashboard Design. So it is very well worth the effort to read both books. My main criticism about this book is that it is not in color, which is a pity since it’s about data visualization. Some examples were not clear as you could not make any distinction between the colors. Perhaps the e-book version is in color, but I haven’t been able to look into that one, so it is probably worth checking out the e-book instead of the printed version.

Say it with Charts 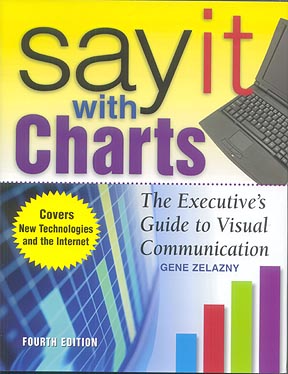 During the dry-run of my data visualization session a BI manager of my company recommended me this book. It’s written by Gene Zelazny, a consultant by McKinsey. It is quite an old book, initially written in 1985 and already in its fourth edition! However, it still talks about some universal concepts of data visualization which still hold firm today. As with the other two books, there are not a lot of pages so you’ll breeze through it.

The book is divided 4 large sections. The first section introduces you to charts. First it gives an example of a guy giving a presentation and of course doing everything wrong. It presents you with 5 basic chart types – pie chart, bar chart, column chart, line chart and dot chart – which are according to the book the only ones you’ll ever need. A bit short-sighted, but probably due to the age of the book. With all the designer tools and computing power we have nowadays, there are certainly more chart types available which are also efficient in its communication.

The second section gives 80 examples of every possible combination of those 5 basic charts. This is very good introduction to people new to charts and it is also a good source for inspiration. The third section talks about concepts and metaphors and is in my opinion worthless. It’s over 60 pages full of outdated sketches. For example on how to use arrows to symbolize process or interrelationships. Basically a lot of PowerPoint/Visio/Clip Art objects. This section was written in a time with no Internet so I get the idea, giving the people some inspiration, but it should’ve been thrown out in later editions. The last edition was published in 2001 and surely there was already some digital revolution going on. Speaking of, the last section goes into detail about the wonders that this revolution has given us. It was added in the latest edition and it is the only one in color. It talks about how computers simplify the development of visualizations and what powerful/beautiful creations can be made with all this new technology. However, it is already 12 years old and it looks – again – very outdated and to be honest, ugly as well. There are a few design errors which the other two books warn about. This section is in serious need of an update. It even talks about animation and gives examples, which is a bit pointless in a written medium such as a book.

Is this a bad book? No. Skipping the last two sections and focusing only on the first two, you got yourself a very nice introduction to charts. A very quick one as well, as this reduces the book to a mere 128 pages. There are also some exercises in this book (get out your pencil) to get you started about thinking how to use charts. Conclusion: still worth the read, even if it is just to laugh with the old technology J.