Review of The Well-Grounded Java Developer

by SQLDenis on January 9, 2013 in category Application Lifecycle Management
Tweet

This is a review of The Well-Grounded Java Developer, Vital techniques of Java 7 and polyglot programming. Written by Benjamin J. Evans and Martijn Verburg. The book was published in July, 2012 and it contains 496 pages 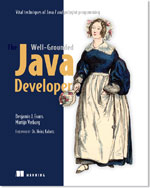 Right from the start I want to say that this is an excellent book and I highly recommend it. One thing you do need to be aware about is that in order to use this book you need to know Java. If you don’t know Java then this is not the book for you. This book is all about bringing you to the next level as a Java developer by showing you how to do continuous integration, dependency injection, testing, performance tuning, and more.

This book even shows you how to use different languages that run on the JVM. The book is written in a easy and concise style, everything is very clear. I also love the annotations which are sprinkled throughout the book, they give some nice background information. While the chapters on Groovy, Scala and Clojure are not a complete reference for the language, they do provide enough material to form a nice foundation, now you can further explore the language on your own.

The book is split up in four parts, I will list each part with the chapters within that part and will give a brief summary what the part is about

This section shows you what was added in Java 7, for example you can now use strings in switch statements, try-with-resources(similar to a using statement in c#, it frees up the resources after it is done). The Java IO stuff has been rewritten and much easier to use, where you had to write a whole bunch of code before, you can now do the same in much less code. Some things that did not exist in Java in terms of IO but now does exist are explained as well.

This part has a lot of stuff and as a Java developer you should really know how this stuff works if you want to get to the next level. Dependency Injection(DI) and inversion of control (IoC) are covered, Guice 3, the reference implementation for DI in Java is also covered. Concurrency before Java 5 and concurrency now is covered. Concurrency will be a must now that we have multi-CPU and multi-core everywhere, you better get your wits around it. There is a whole chapter on the class files itself and how they are loaded as well as what they compile into. These are fun details and will show you exactly what happens when you compile and execute a class. Evereybody’s favorite subject performance tuning is covered in this part of the book as well.

Part 3 Polyglot programming on the JVM

This is a very interesting part of the book and I would suggest not to skip it. There are 3 type of languages covered in this part:

Clojure, a Lisp for functional programming

The last part is all about automation and making your life easier. If you are a developer who still deploys stuff by using FTP to move JAR, EAR and WAR files, pay attention. Maven is covered as the build automation tool, Jenkins is the continuous integration tool. In the Rapid web development chapter Grails is explored.

Head on over to Amazon for other reviews of The Well-Grounded Java Developer, Vital techniques of Java 7 and polyglot programming

The site for the book can be found here: http://www.manning.com/evans/

** The language and the platform

The changes in Project Coin

Dealing with directories and directory trees

Inject some knowledge—understanding IoC and DI

Guice 3—the reference implementation for DI in Java

A pragmatic approach to performance analysis

What went wrong? Why we have to care

A question of time—from the hardware up

**Part 3 Polyglot programming on the JVM

Polyglot programming on the JVM

How to choose a non-Java language for your project

How the JVM supports alternative languages

Getting started with Groovy

Differences from Java—traps for new players

Groovy features not (yet) in Java

Interoperating between Groovy and Java

A quick tour of Scala

Is Scala right for my project?

Looking for Clojure—syntax and semantics

Working with functions and loops in Clojure

Interoperating between Clojure and Java

** TDD in a nutshell

Getting started with Maven 3

Code metrics with Maven and Jenkins

The problem with Java-based web frameworks

Criteria in selecting a web framework

Getting started with Grails

Getting started with Compojure

A sample Compojure project—”Am I an Otter or Not?”

What to expect in Java 8

New directions in the JVM