Why is it important to know that using has no empty catch and check for null in the finally?

In my previous post I examined what the Using code does. And why the 2005 version of the MSDN article might have been wrong.

But why is it important to know that Using is not using a catch?

Here is the code that we saw in the article.

The above code will just go merrily on it’s way, it won’t really stop and it is swallowing the exception. The user of that code does not know something bad happened and thinks everything is just fine. The user does not know there is a line after the exception he was supposed to get. He is blissfully unaware.

But we are glad to say that Using does not do that. 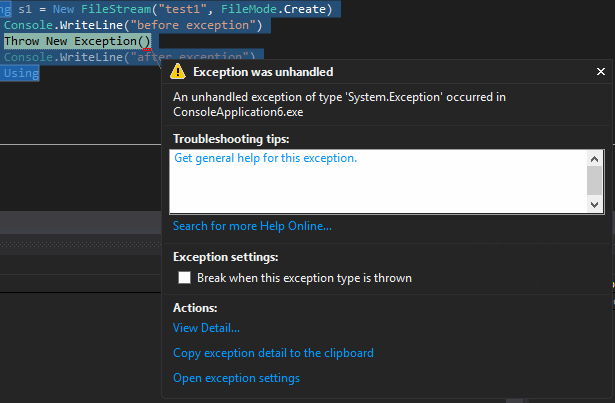 But the isnot nothing bit in the finally statement is useful to know too.

but the using statement does not cause this.

Sometimes it pays to look just a bit further and not believe the first hit you get on Google.