by Christiaan Baes (chrissie1) on January 18, 2014 in category VB.NET
Tweet

I’ve been using SynchronizationContext for quite a while now. To me it is the best way to synchronize with the main thread. If you do a lot of winforms development like I do than you will know that you need to do this a lot. Blocking the UI is a nono.

SynchronizationContext has 2 methods that are of interest to us. Send and Post. According to the MSDN documentation.

Meaning that Post is Async and Send is Synch. In most cases you won’t notice much difference between the two. And in most cases I would just recommend Post. Since in most cases you are just using the Synchronizationcontext to show something on the screen. I will however show you when Send is the better choice. And that is when you need to read from a control and need that result for later processing. This is a very simplified case but it makes the point quite nicely.

Empty form with 3 textboxes and a button

And now add this code.

The result will be this. 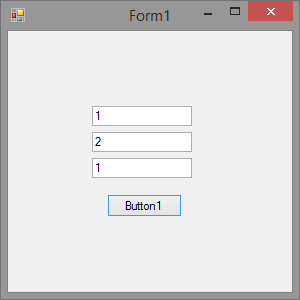 So something to be aware of.