by SQLDenis on December 6, 2012 in category Business Intelligence
Tweet

This is day six of the SQL Advent 2012 series of blog posts. Today we are going to look at standardized naming conventions and other conventions that you should standardize as well. Every company needs to have standards that developers need to follow in order to make maintenance easier down the road. There are several things that you can standardize on, here are just a few:

The naming of objects

The layout of code including comments

The way that error handling is done

The naming of objects

Never use Hungarian notation on column names or variables, I have worked with tables that looked like this

If you have intellisense in SSMS, having every table start with tbl is making it pretty useless. Also sometimes the data type of a column will change but of course nobody goes back to rename the column to reflect this because it will break code all over the place

It would be better to have something like the following

Now I don’t have to scroll all the way to the top to figure out what is actually stored in this variable, EmployeeSalary pretty much describes what it is and I can also pretty much assume that this will be some amount and not a date as well

The layout of code including comments

I have worked with code that was all in lowercase and all in uppercase. I have no problem with either but if you at least standardize on one or the other it will be a little easier to jump from your code to someone else’s code

You can setup standard templates in SSMS for your organization, you can get to it from the menu bar, View–> Template Explorer or hit CTRL + ALT + T 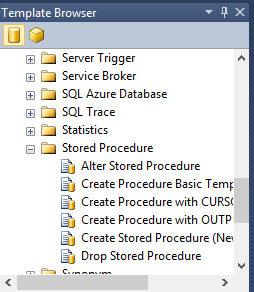 Standardize on comments as well

The way that error handling is done

I like to have all the errors in one place, this way I know where to look if there are errors. Capture the proc or trigger that threw the error, it if is a multi-step proc then also note the code section in the proc, this will greatly reduce the time it will take you to pinpoint where the problem is. Michelle Ufford has a nice example here: Error Handling in T-SQL that you can use and implement in your own shop.

There are many more things that you need to standardize on, the thing that bothers me the most is when I see dates in all kind of formats when passed in as strings, use YYYYMMDD, this will make it non ambiguous.

That is all for day six of the SQL Advent 2012 series, come back tomorrow for the next one, you can also check out all the posts from last year here: SQL Advent 2011 Recap