by SQLDenis on December 24, 2012 in category Business Intelligence
Tweet

This is day twenty-four of the SQL Advent 2012 series of blog posts. Today we are going to look at how to get help.

Imagine if you were stuck with some problem in 1995, you didn’t have that many choices, you could ask the resident know it all at your job, you could lookup stuff in a book or you could go on the newsgroups and try to get help that way. These days there are many more ways to get help. There are many more books than in 1995, there are also a lot more whitepapers available these days. Twitter is a great way to get help as well if you use a special hashtag. Attend one of the many SQL Saturday events, there are always experts available who are willing to help you out with your problems. These events are held all over the world and there is a good chance one will be held near your town as well.

Join a QA site like stackoverflow, head on to a specialized site on stackexchange, here is a list of all of them http://stackexchange.com/sites You can hit some of the forums on this site. For SQL server, you can also try SQLServerCentral

Don’t be scared to ask for help on twitter, if you don’t know any of the SQL Server tweeple, use the #sqlhelp hash tag and ask for help, here is an example of what it looks like #sqlhelp 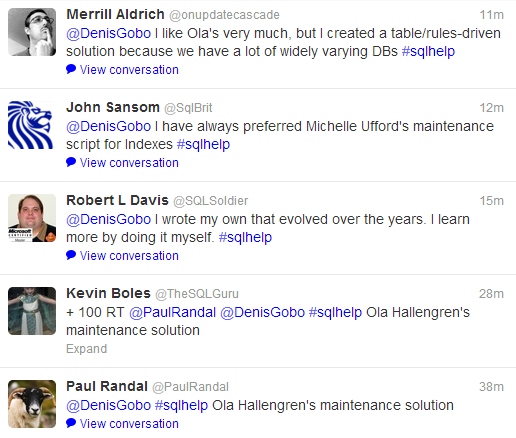 Start following these people and if you have questions don’t hesitate to ask them.

That is all for day twenty-four of the SQL Advent 2012 series, come back tomorrow for the next one, you can also check out all the posts from last year here: SQL Advent 2011 Recap