Automating Index Statistics Collection with SSIS – The fast one

Article, Automating Index Statistics Collection, went over a method to automate running a script authored by Jason Strate.  The script is a comprehensive collection of index statistics and usage details that allows a DBA or designated administrator of SQL Server one place to go for review.  SSIS was used to execute the script on a list of SQL Server Instances and databases specified in flat files.  The overall design of the SSIS Package was OK.  Given the shredding method and row-by-row export to flat files of the results, the overall run time could only handle a relatively small amount of total indexes and proposed indexes.

Since the package couldn’t handle larger, more realistic databases and index usage, the SSIS package was redesigned.  The new design takes advantage of the Data Flow Engine more.  This is done by preparing the full results from the script and exporting those results, not row-by-row, but by taking full advantage of the total room allowed in the given buffer.

The flow of the design does not change so the previous article’s design can still be utilized.  The method that is used in SSIS changes.

Below is a snapshot of the control flow.  The same script task is utilized to pull the file contents that contain the server listings into a variable.  This moves to the Foreach Loop Container and then upon each enumeration, executes each task within the Foreach loop.

The fourth level, the index analysis script, is the primary new design that we will use.  In this example, we will use another common method in SSIS.  A global temporary table will be created using an Execute SQL Task and then the select on that table will be the source in a Data Flow task.  In order to accomplish this, a connection manager that retains the same connection through the process must be used.  To do this, set RetainSameConnection to True in a connection manager named, Keepconn.  In SSIS, when a data flow task is completed or any use of the connection manager, a release connection is called.  In total, this can happen several times through a full cycle of the package’s runtime.    In order to retain the same connection through the runtime or a specific sequence of tasks, the connection is forced to not be recycled or released.  This retains the temporary table given the connection has not ended and prompted for a removal of the table.

The steps above work as a sequence that does the overall same process as the design in the previous article.  However, the creation and population of the temporary table prior to the data flow, allows for the data flow to work as efficiently as designed and to its best capabilities.  This is the foundation of a data flow: Data in, transform, and data out.

In order to take into account the multiple databases that index statistics should be collected from, pass a parameter into the SQLStatement.  This is done by altering the statement to use a variable in T-SQL instead of the DB_ID() function. 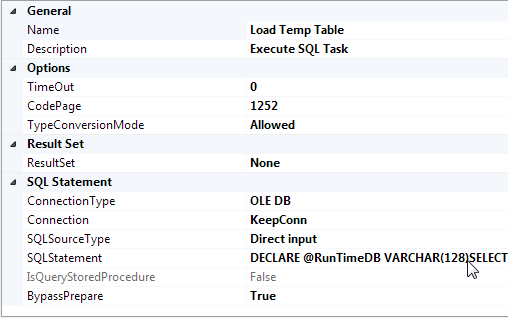 In the data flow task, all that is needed is to map the results to the flat file destination. 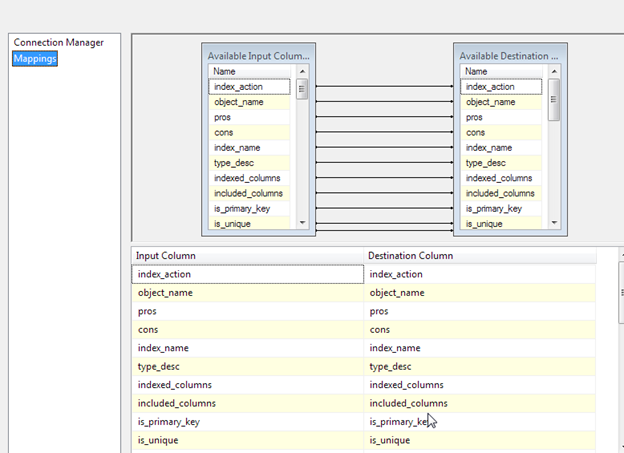 To do this, we check to ensure the table exists before calling a DROP TABLE statement. 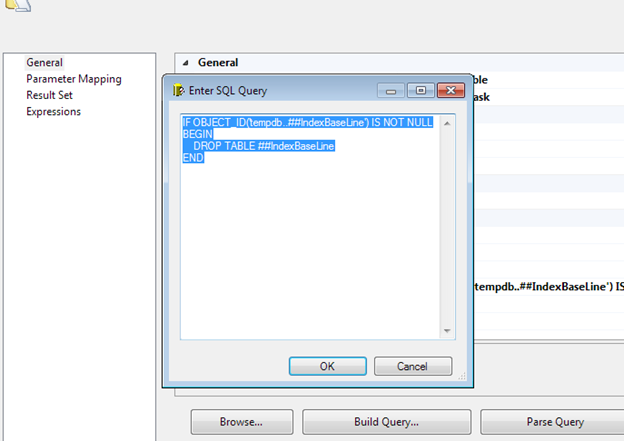 The overall execution in the first design resulted in the following. 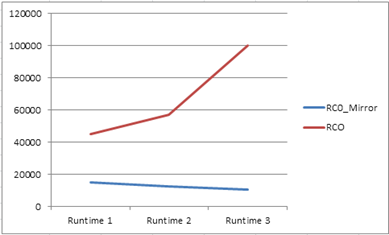 With this redesign, the same test results in the following.

The runtime on each test is a remarkable difference from the first SSIS Package design.  This is, in a way, the same as tuning a really bad execution plan but for SSIS, we tuned if our flow is right first.  The query takes over 20 minutes, but after adding an index or two, query time goes to a second or two.

As expected, the files are created and populated with the information we can use to start turning on the “fast” button in SQL Server by ensuring indexing is done correctly. 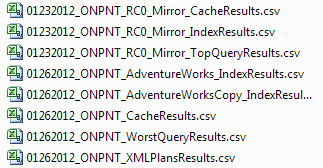 Recap of the life cycle of this package

We accomplished a lot in these two articles.  Shredding variables, temporary tables in SSIS, dynamic connections to multiple instances based on one connection manager, changing database context in the middle of execution based on more dynamic methods and an overall, better design based on a first, not well performing one.

The best lesson we can take away is, when a design or even statement works great, test it on volume that you may run into.  Even if the volume isn’t reality yet in your facility, it may and probably will, change over time, and your implementation should withstand that growth.