Recently, during a pre-conference seminar that I presented, the group and I had a long discussion about why there would be a need to add a nonclustered index that consisted of the primary key as the key column.  This topic also came up in a client training session I presented and in passing with a few peers.  Given the topic and the overall consensus that this was a bad practice, I wanted to discuss it in a post and show a reason why creating a nonclustered index with a key column only being the primary key is actually a great optimization for some plans.

I’d like to focus on what would be the largest aspect to why you would use an index strategy of creating nonclustered indexes with only the primary key as the key columns: pages pulled into the buffer.

Let’s go through an example

Using AdventureWork2012, create a table from Sales.SalesOrderHeader that can be manipulated to fit the following tuning steps.

The above statement will create dbo.IndexPageCount and make the SalesOrderID the primary key column.  At this point, no other indexing has been done.  If a query was executed that relied on a predicate of the SalesOrderID, technically, further indexing may not be needed.  For example, review the following query and execution plan generated from how the table and indexing is setup on IndexPageCount.


And the plan generated from this query

In all respects, this plan is optimized fairly well.  The one key aspect to the query and plan is, the clustered index is the table and will pull all columns along with it, which equates to more pages that are required to come into the buffer.   We can look at the page count required for the exact table by utilizing dm_os_buffer_descriptors, allocation_unit, sys.indexes and sys.partitions DMOs and catalog views.

Next, run the script below to create the nonclustered index or, covering index that consists of the key column being the primary key column of SalesOrderID and INCLUDE the DueDate, ShipDate and SunTotal columns.

After reviewing the statistics IO from the second execution, the new covering index was utilized and showed an improvement on logical reads.

Looking at the execution plan, we can see the new nonclustered index is effectively being utilized as well. 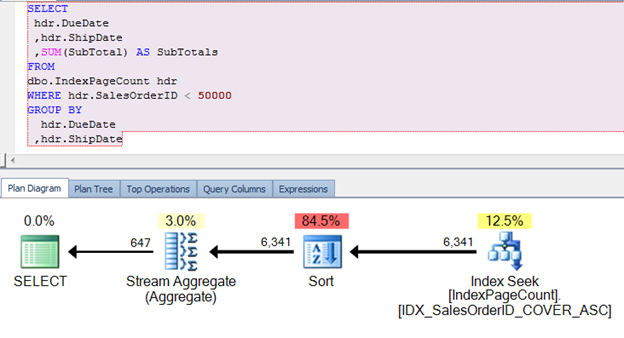 Of course, we’ve only replaced an index seek for another index seek.  To see the real optimization, the IO and then equating that to review of the pages pulled into the buffer should be checked.  Execute the query to review the pages in the buffer that was used previously.