There are several considerations when deciding if your Merge Replication setup is in need of an article that uses Row-Level Tracking or Column-Level Tracking.  The primary considerations will be the business needs and overall data retention needs.  Can you allow subscriber data to be lost if it is not the last updated data?  At the highest level, Row-Level Tracking is performed based on a datetime column and determining if the row has a conflict, and using the date column to determine resolution based on a resolver.  Column-Level will allow conflict resolution based on a date column using a resolver, as well as a merge aspect of the column level changes by both Publisher and Subscriber.  Aside from the business, from a DBA’s perspective, performance will be a factor in deciding which setting to use on an article.  Although the base decision will always be determined by what the business application dictates, performance considerations may direct development to other integration aspects that are considered acceptable data merging practices for the given business rules.

Although Column-Level tracking may seem like it would take more resources to implement, there is less overhead in terms of what is transferred between Publisher and Subscriber.  Column-Level Tracking does implement a great deal more in terms of Merge Replication tracking and system table storage causing higher resource consumption on synchronizing.  Careful tuning of the merge system tables with Column-Level tracking can be done to assist in a higher overall performance during synchronizing.  With Row-Level tracking, there is no choice in Merge Replication processing but to send the entire row that was updated.

Take the Sales publication that was setup in the article, “Merge Replication – Filtered Data Publication Setup” and the SalesOrderHeader article.  SalesOrderHeader utilizes Column-Level Tracking and a resolver of Later Wins on OrderDate.  This means, if a change is made to the Publisher on the column DueDate and a change was made on the Subscriber to column BillToAddressID, the DueDate change from the Publisher and the BillToAddressID change from the Subscriber would be merged, resulting in a row with both updated columns.  Now, if a Publisher change on DueDate was made and a Subscriber change on DueDate was made on the Subscriber, the most recently updated column would be the winning result.  The same change to DueDate on both Publisher and Subscriber would result in a conflict also.  This conflict could be handled in a custom resolver that implements business logic and a decision could be made to merge, or retain in some way, both values.  With these examples, the data volume transferred between the Publisher and Subscriber would be less, but there would be a great deal more intervention by Merge Replication to determine all of this in order to make the right decision based on the settings for the article.

We will focus on SalesOrderHeader.SalesOrderID 75123.  Ensure that updates have been made to the SalesOrderID prior to this example and you have synchronized the updates.  If no changes or subscriber traffic has occurred on the publication database, the MSMerge* tracking tables will be empty at that time.  To show how the level tracking functions, it is best to update a subscriber and merge the changes before this running these examples.  You can use the same update statement below to perform that initial update and merge event._

Before replicating to the publication database, check the MSMerge_Contents and MSMerge_Genhistory to see the pending changes on the subscriber that we just performed.

The query above shows that the update performed earlier is in a pending state on the subscriber.  This is determined by utilizing the genstatus column in MSMerge_Genhistory.  The genstatus values can be “0 = Open”,“1 = Closed” or “2 = Closed and the update was taken from another subscriber”.  This information can be critical to tracking where updates originated from while troubleshooting. 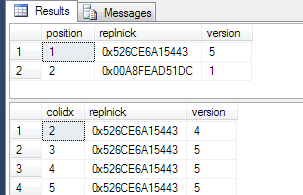 The position column represents the actual column position for the results from running sp_showcolv.  This coincides with the actual cardinality of the columns in the table.  In our results, columns 3, 4 and 5 are showing a version number of 5.  Checking INFORMATION_SCHEMA.TABLES we can return the position and then match it up to the position returned from the sp_showcolv procedure.

The following script shows how we can match these values all together in order to return meaningful information regarding the actual lineage and where updates originated.

Run the same script on the publication database so the versions can be compared.  Comment out the line and genstatus = 0 as the genstatus of the rowguid will be in the state of the last closed generation.

As shown above, the versions on the publication database for the columns and specific rowguid are lower than the versions shown on the subscriber.

This has shown that the columns that were updated are the only ones transferred in the colv1 column.  That may seem to be a situation where performance would be better but this also shows the added processing that is required during the actual synchronization process.

Results from the publication database

To show the difference in performance, a mass update has been executed on the SalesOrderHeader on the publication database.  The update changes the SalesPersonID and LoginAccount so the rows will be included in the partitioned snapshot.

Next, the subscriber database was updated for all the SalesPersonID of 275.  This results in 10388 rows being updated.

Results from applying the snapshot and synchronizing 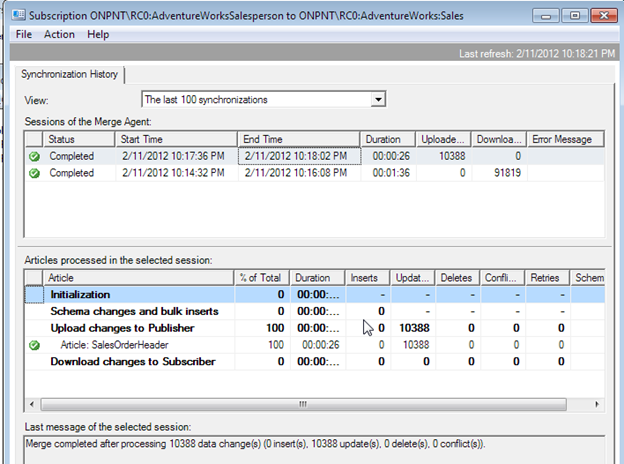 Now, alter publication and article SalesOrderHeader to use Row_Level Tracking.  Create a new snapshot and re-initialize the subscriber.  Run the same update statement to SalesPersonID of 275 as performed on the Column-Level Tracking enabled article. 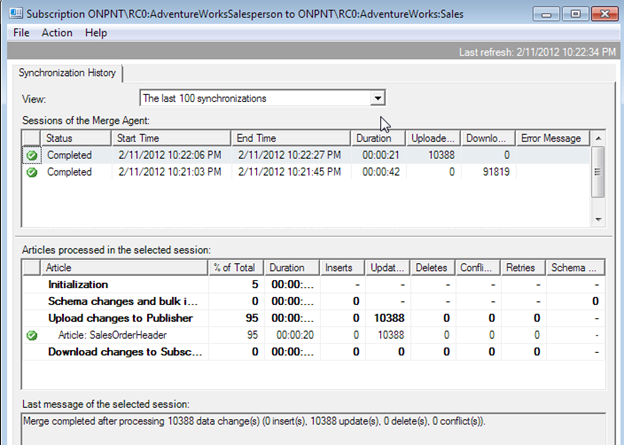 This shows quite a difference in both the snapshot applying and the synchronization steps.

Although the replication monitor results for total duration do not go to a milliseconds level, it shows the differences in the two types of tracking that are done for duration in both synchronizing and applying snapshots.  The replication monitor is also commonly used to show performance and is a great comparison in testing.  In our test, Column-Level Tracking having a longer overall duration is directly tied to the added need for Merge Replication to maintain and process more metadata while Row-Level Tracking is a shorter overall process and needs less metadata work.

This example has shown that there is a cost between using Row-Level and Column Level tracking on articles.  The business and application needs will always come first though.  The need for Column-level Tracking may be unavoidable but with this knowledge, going into a publication design with articles enabling Column-Level Tracking can be valued in being proactive on adding performance tuning prior to implementing your publications into a production environment.