I often run across databases that store files, images, and all sorts of large object data types, better known as LOBs.  These databases will typically become problematic as storing these types of objects in a relational database has some performance problems with it.  Some of those performance problems revolve around excessive server resource consumption and limited indexing abilities which make requesting or querying the data as painful as the performance of inserting data into them is.  Although the concept of storing these objects in SQL Server is mostly a negative design to most administrators, it does happen and there are valid reasons, such as security and retention of the objects.  For example, in some medical related systems, files can contain patient related information and fall under strict guidelines and security restrictions.  Most administrators that have worked in a hospital or a pharmaceutical system that provides Rx products have run into these strict guidelines and security measures.  Placing these files into a SQL Server database allows for a deeper security model as well an easily obtained recovery model and longer retention period.  Now, the cost of disk for a database server is typically higher than a file-based system’s disk cost.  That alone can outweigh file layers that can be used with third party tools in order to meet the same security and recovery needs.  Weigh those options heavily when in a designing stage in which files are part of the overall design and needs.

Even with options available, the fact remains, the LOB data types will be found and we need to deal with them so we can make the user experience as good as it can be with the data services.  Recently I was reading an excellent article on SQL Server Pro by Paul Randal that discussed a method for achieving index seeks when LOB data is involved.  Having been in many data service layouts that have used LOB data types, the tip that Paul provided was excellent, simple, and effective.

To show the effects of using the method Paul discussed, I will create a table that mimics what would be in a real –world production database that needs to store Word documents.  The table will consist of an identity as a primary key, a user name that is associated with the file inserted, and the section of the data from the LOB data for each row inserted.

(Warning: this insert will take some time due to the LOB insertions.)

Review the contents by using a select statement and the LEN() function.  Set Statistics IO on at this point so you can better see the system requirements to fulfill the query.

As you can see, there isn’t much value in looking at the results of a query like this and the actual LOBVAL column,  although the length values returned of the LOBVAL column do have some value for knowledge of what is being taken.

This query requires an extreme amount of resources to complete, as we’ve shown monitoring the IO statistics through these examples.  Working with the substring method that Paul discussed in his article, we will take advantage of the computed column that was created on the table, SUB_CONTENT.  This column holds the first 100 characters of the LOB column for each row.

Now, let’s take a look at something that could be a requirement in a production environment for updating the PerfLOB table.  The USERNAME column must be updated so ownership of the documents are maintained.  This could be done with the following query.

The update above that is relying on searching for the matching document, like the query to obtain length and the LOBVAL column, takes an extreme amount of resources and time to complete.  Given a larger table, more resources would be required and there would be lengthy locking time on the table.  We can use the substring and computed column method to make this more efficient.

We have the SUB_CONTENT column and can make it the key column in the index, we can use the INCLUDE option to include the actual LOB column as a non-key column; LOBVAL.

As with the earlier warning regarding the time it will take to create the table and insert 10,000 rows into it, any mass change or work that is required on a table like the PerfLOB table, will take some time.  This is critical to estimating the time needed to perform these actions.  While the index is being generated or other tasks may be running, the locks on the table will prevent other transactions from accessing them or lower level locks being placed on them.  Be sure to plan the time when the table will not be accessible, as blocking may occur or users will experience a drastic decrease in overall performance.

When you store LOB data in SQL Server, it is stored in LOB_DATA and in a page type of its own designated as Text/Image.  The page is store along with the IN_ROW_DATA page in a sense utilizing a 16 byte pointer that is used to refer to the LOB_DATA in the page.

We could visualize this as 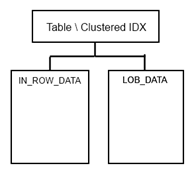 Something to consider about the storage needs for and time of a nonclustered index creation is that the LOB_DATA page will exist in the nonclustered index.  We can take a closer look at this by running the following query to dig into the pages.

(Note: the use of TOP 1 is added given the testing example and the documents all being the same.   The documents would be unique data in a normalized table.)

Looking at the execution plans generated from the new update statements, we can see the plan looks much more effective. 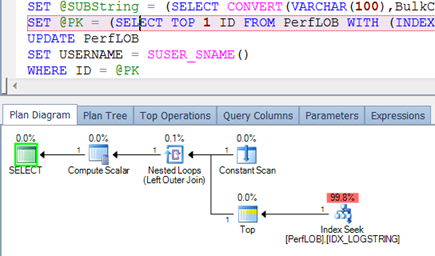 Further, the IO generated  by the update statement has significantly been reduced.

As Paul said in the original article that sparked this blog, this isn’t a truly ideal situation but is very effective when the exact circumstances arise.  Remember to maintain the indexing that is created as well as indexing, storage and resource utilization when LOB data types are stored in your databases.  These tricks are always good to have, but at the same time, using them appropriately and effectively is the primary key to better data services.