by SQLDenis on December 3, 2011 in category Data Modelling and Design
Tweet

In today’s post I will cover partitioning. In the SQL Server 2000 days we called this horizontal partitioning, it is actually something I have implemented with great success when I started at my current job. Fragmentation was a non issue anymore because the way I have set up the tables the inserts didn’t fragment the tables anymore. Index rebuilds were also much faster since the tables were smaller and I could rebuild more than one table at the same time.

In order to show you how to do this, we need to first create a bunch of tables. We will create a table for each year.

We will now insert some data into these tables

Now let’s run a simple query that returns one row

Look at the execution plan 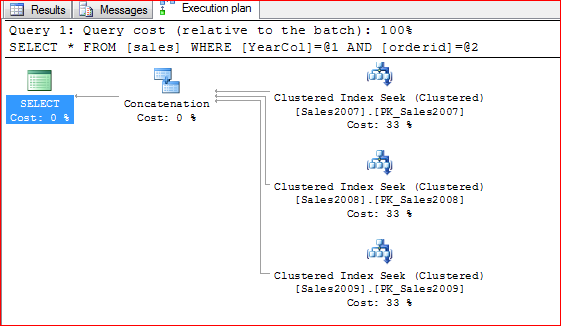 Ouch, it touches all 3 tables.

I want to be able to insert directly into the view, this way I don’t have to worry about which table I have to reference and I also don’t want to mess around with dynamic SQL to accomplish that. Below is a simple insert statement

I get a nasty error

UNION ALL view ‘tempdb.dbo.Sales’ is not updatable because a partitioning column was not found._

We can easily fix this by adding a constraint on each table and specifying the valid year. So on Sales2007 yearcol can only be 2007

Now if you try to insert into the view, you will succeed

How about that same select statement from before? let’s try it again

Look at that…because of the constraints that we have added, SQL Server knows it only needs to fetch data from the table with the 2007 data.

You would have a variation of the same view on all 3 servers. One bad thing is that if one of the servers is unavailable then the whole view is unavailable.

Partitioning in SQL Server 2005 and up

When you use native partitioning you don’t need to create 3 tables anymore, you just have one table and SQL Server will create as many partitions as you specify. As a matter of fact every table that you create in SQL Server and up is partitioned, by default it will have one partition unless you partition it yourself into multiple partitions.

Let’s mimic what we did before. Instead of three tables we now only need to create one table

We will now add a primary key

Now it is time to create our partition function. Here is how we will do it

You can verify this by using the function $partition

And here is the output

Now we will add a clustered index and partition this on the YearCol column, the syntax looks like this

Now, let’s compare the plan for both partitioned views and partitioning in 2005 and up 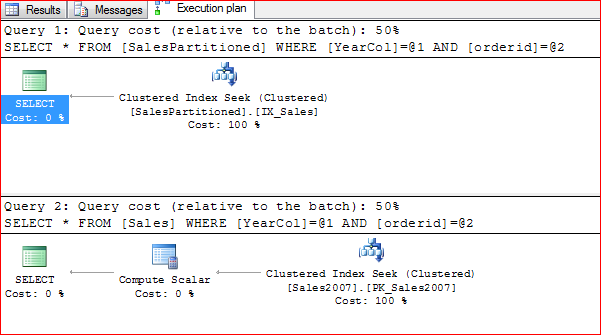 As you can see the cost is the same for both

We can do a simple insert just like before, there is no need to specify any partitions

If you want to see how many rows each partition holds, you can use one of these two mehods

I briefly covered partitioning in this post, there is much more you can do with partitioning. I did not cover merging, deleting partitions, switching tables in and out of partitions.

Below are links to two white papers on partitioning, I highly recommend you read these before implementing partitioning.

When a database table grows in size to the hundreds of gigabytes or more, it can become more difficult to load new data, remove old data, and maintain indexes. Just the sheer size of the table causes such operations to take much longer. Even the data that must be loaded or removed can be very sizable, making INSERT and DELETE operations on the table impractical. The Microsoft SQL Server 2008 database software provides table partitioning to make such operations more manageable.

This paper covers strategies and best practices for using partitioned tables and indexes in SQL Server 2008. It is intended for database architects, developers, and administrators of both data warehouse and OLTP systems, and the material is presented at an intermediate to advanced level. For an introduction to partitioned tables, see “Partitioned Table and Index Concepts” in SQL Server 2008 Books Online at http://msdn.microsoft.com/en-us/library/ms190787.aspx.

This paper is very long (65 pages) this is why it is offered as a downloadable Microsoft Word document.