by SQLDenis on December 16, 2012 in category Business Intelligence
Tweet

This is day sixteen of the SQL Advent 2012 series of blog posts. Today we are going to look at the lack of database design and normalization. Normalization and database design is a big enough topic that there are 500 page plus books written about it. This post will barely scratch the surface, if you want to know more about this topic pick up a book about it. Pro SQL Server 2008 Relational Database Design and Implementation is one that I recommend. I did an interview with the author here: Interview With Louis Davidson Author of Pro SQL Server 2008 Relational Database Design and Implementation

So what is normalization? Normalization is the process of organizing the columns and tables of a relational database to minimize redundancy and dependency. Normalization usually involves dividing large tables into smaller (and less redundant) tables and defining relationships between them. The objective is to isolate data so that additions, deletions, and modifications of a field can be made in just one table and then propagated through the rest of the database via the defined relationships.

Let’s take a look at a simple example. Let’s say we have a book store and we want to capture the book title, the date the book was published as well as the author. We are keeping this very simple so no ISBN or publisher or any additional information.

One of the problems is that if an author wrote more than one book, the author will be stored in that table more than once. What it the authot is a woman and she gets married and decided to change her name, how will you know this is the same person?

Now, let’s create two tables, we are going to create an Author table and a Books table. The Author table will hold the AuthotID, the last name as well as the first name. Now we can use the AuthorID and store that in the Books table

So what is the problem with this so called design? Ever heard of a book that had more than one author? Of course you have there are many of those, this is especially true with technical books.

Let’s drop those tables since we are going to recreate it.

Now what we have to add is a third table, this table will have just two columns, the BookID and the AuthorID, now you can handle many authors per book without a problem. The AuthorID column will now be eliminated from the Books table as well.

Here is what you will end up with 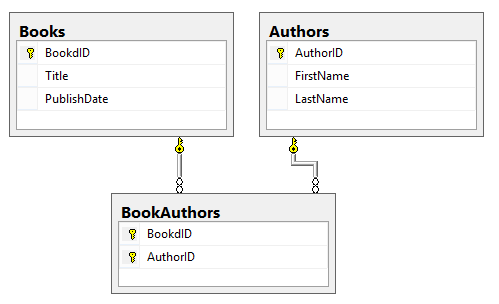 Now, here is the code to add the primary keys and foreign keys to the table

That is a lot of code, this is where modeling tools come in handy. You can use the diagramming tool in SQL Server Management Studio but it is not full feature like the ones below.

I have used ERwin and Visio in the past but use PowerDesigner these days.

Now how would you handle the name change for the author? You can introduce another table where you would have first and last name together with start and end dates, this now enables you to still have the author being one author for reporting purposes but you can now still represent the name correctly for a specific point in time. Another example of this would be the stock market, companies will change the ticker, Sun Microsystem change the ticker from SUNW to JAVA, sometimes they change the name as well, Apple dropped Computers from the name. You still want this to be the same company so you won’t just add another row otherwise how would you do historical charting?

This is also why I like keys that don’t have meaning, these are called surrogate keys, now when you change everything in the row it doesn’t matter. I once worked with a system where…are you ready for this……the primary key was the social security number, this key was then also used as a foreign key in another ten tables. Of course some people would be reluctant to give their real social security number, they made up a number. Now the person with the real number signed up and couldn’t he would call customer support, they would track down the person with the fake number and now the SSN had to be changed in over 10 tables, since we didn’t have cascade update turned on, this had to be handled manually (and of course make sure to highlight the WHERE clause otherwise you are toast)

Remember how we had that BookAuthors junction/lookup table? Sometimes you will actually see a comma delimited list of IDs in a varchar column. This is not the way to store more than one author for a book. This looks easier from an application point of view (however I disagree even here) but now you have to write some kind of row to column user defined function if you want to show all authors. Performance is also going to be a dud, an index can’t be used since your WHERE clause is not sargable.

This is a database which was never normalized to begin with

There are many types of keys, some of them are just synonyms, here are some of them: Candidate Key, Surrogate Key, Superkey, Natural Key, Alternate Key, Compound Key

Like I said at the beginning of the post there many more things to this topic than covered here. I did not talk about normal form at all, make sure that you research what all of these mean

That is all for day sixteen of the SQL Advent 2012 series, come back tomorrow for the next one, you can also check out all the posts from last year here: SQL Advent 2011 Recap