by Eli Weinstock-Herman (tarwn) on April 17, 2018 in category ASP.NET
Tweet

I’m building a B2C website with Cosmos DB as the back-end store and starting with common elements like Authentication. In my prior post, we connected the Cookie Middleware with custom membership logic and a standard username/password login method. In this one, we’ll be extending the system to also allow users to register and login via a third party provider (Twitter). 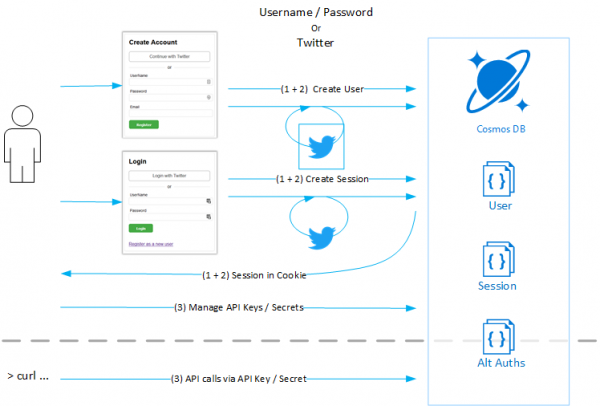 In this post I’ll also start exploring User Authentications as a separate document collection, rather than as additional fields on my User document. I’ve noticed in several past systems I’ve built API keys and authentication mechanisms as properties on Users, but recently started considering that, like my house keys, mixing properties of the user with authentication methods on a single “User” record has been making me uncomfortable. 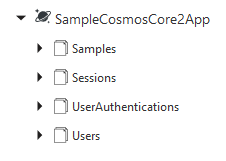 Let’s find out if this works.

In the prior post, I outlined the authentication needs of this system and started breaking it into separate steps forward. Interactive logins would be able to take advantage of a standard username/password system or, alternatively, using a third-party system like Twitter. Once a user has an account, they can create and manage API Key/Secret pairs for API access (which is the next post).

So where are we so far? We have built an ASP.net Core 2 website and added Cookie Middleware that is associated with LoginSession classes stored in Cosmos DB. Users can register with a username, password, and email address and are stored as LoginUser documents in Cosmos DB. Business logic for this is bundled up in a concrete CosmosDBMembership class while the Persistence logic to work with Cosmos DB is encapsulated in a UserPersistence class, both of which are registered with the built-in ASP.Net Core 2 Dependency Injeciton services collection.

Here’s what we’ll be adding:

This is a much smaller task then the initial work to put in custom authentication, but like that post I’ll present the changes file-by-file rather than in the order I developed them in.

The source code through this set of changes is available here: github: Sample_ASPNetCore2AndCosmosDB, Post #3 Branch

The Twitter middleware uses a standard OAuth sign-in process, but does so in a way that takes care of all the details for us.

When a Challenge is issued through the twitter middleware, it takes precautions like generating a one time roundtrip token and stores that token and additional parameters for us in a shortlived cookie. It then sends the user over to twitter with a callback URL and that roundtrip token which Twitter uses once the User has logged in and granted us access. Twitter calls back to the callback, which is handled 100% by the middleware, including verifying that roundtrip token came back around successfully. Information from Twitter is added to the Claims on the HttpContext, just as cookie informaiton is when we use the Cookie Middleware, so we can then use that information to perform our internal authorization logic. 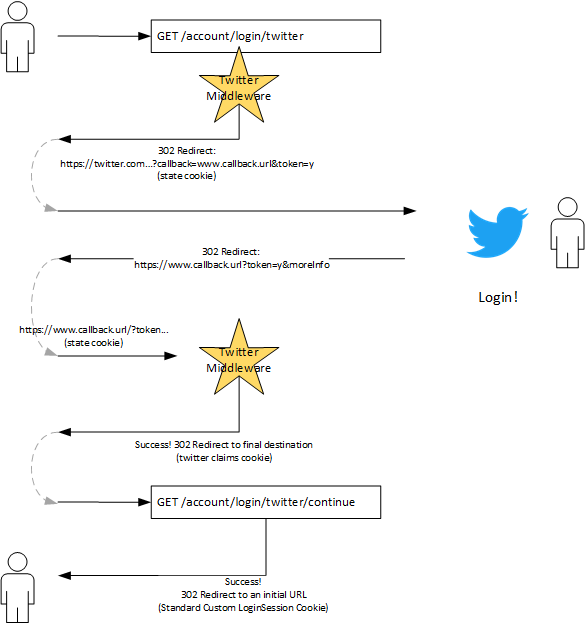 Once they’re logged in (or registered), we can generate a session and forward them to the URL they were originally headed to.

The first step is to set up credentials with Twitter for the application. The documented MSDN setup documentation has good steps for this, so we can follow through on the twitter side to get an app and access key setup. 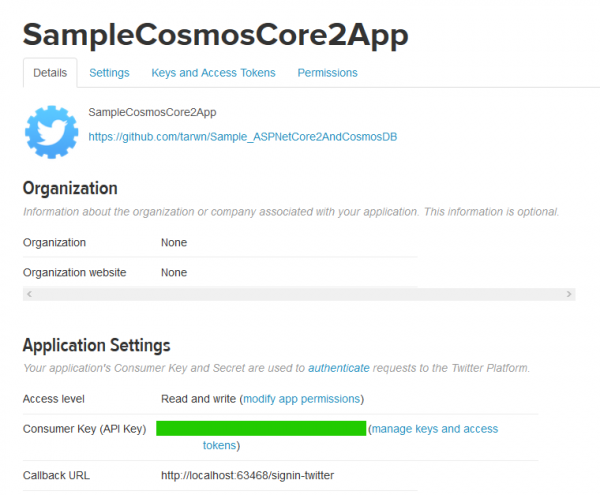 We’ll be storing the API Key and access token in our settings file for now, later we’ll take advantage of secrets management to store it in a way that doesn’t expose it to git.

The next part is to configure the middleware to use those App settings from Twitter. Once we receive the information back from Twitter, we will use that twitter Id to either continue user registration or attempt to log the user in, depending on where they started. Rather than build conditional logic into the Twitter options for the middleware, we can instead provide a final URL to redirect to for each endpoint:

When the redirect comes back from Twitter, it passed back account information that is parsed into claims on the HttpContext.

During the Twitter authentication challenge, there is an internal cookie to carry state between the call to twitter and callback. Once the account information has been parsed, however, that information exists purely in the HttpContext for that request.

To bridge the gap between receiving the Twitter information and being able to use it on the final redirect, we can register a second Cookie middleware and tell twitter to use that middleware’s AuthenticationScheme for SignIn. This way, once the Twitter middleware has finished parsing the Claims, it will turn around and “SignIn” via the new Cookie Middleware. This writes the claims from Twitter to a new cookie for subsequent requests.

To support the Login flow, we need a set of new endpoints and a button. 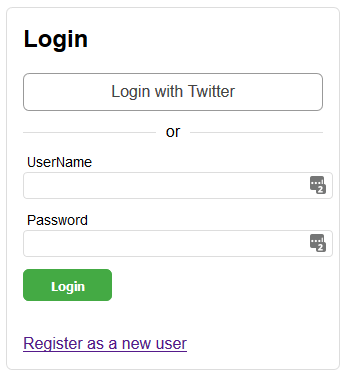 Then we add the endpoints to the Account controller to start the Twitter authentication process and capture the callback values at the end to start a new login session.

The Twitter information comes back in the “ExternalCookie” we registered in the Startup configuration. We’ll add a method to CosmosDBMembership to create a LoginSession just like we do with a username/password, except for a third-party identity instead. The last step is to clean up the “External Cookie” using it’s SignOut method.

Originally I added the SignOut for cleanliness, but it was later pointed out to me that this is extra overhead going across the wire on every Request/Response and, in some cases, can actually result in "Request Too Long" web server errors if you stack up too many cookies.

The registration flow is similar to the login flow, but we need one additional endpoint to serve up the registration form once we have the user’s twitter information for authentication. 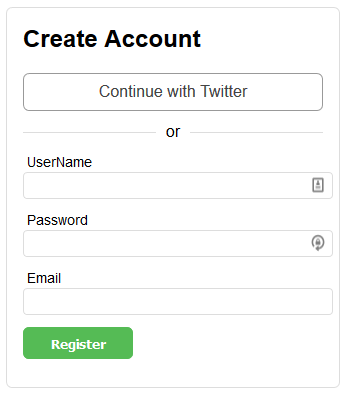 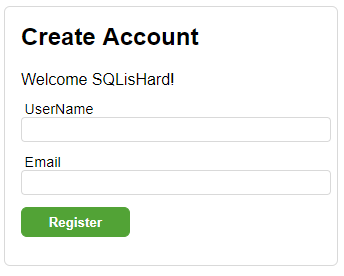 Continuing Registration after logging in as @sqlishard

Like the Login form, we add a link to the Registration form.

And a view that collects a username (for display purposes) once they’ve authenticated with Twitter.

Then we can add the 3 endpoints to start the twitter Challenge, extract the details and feed them into the Registration form, then complete the Registration and log the user in for the first time:

Once again, the last step in the process is to SignOut of the “ExternalCookie”, cleaning up after the stored Twitter information.

The changes for the membership object are fairly light. We need to be able to:

These will expose the new Persistence methods we need against Cosmos DB.

The Login method is straightforward: Find a user that has a UserAuthentication of Twitter with the given twitter id. If we can’t find a user, we don’t know who they are.

Registration is a little trickier. We have to create and store both a LoginUser and LoginUserAuthentication object to successfully register the user and we need the generated id from the LoginUser that Cosmos DB generates from that save to populate the UserId property on the “LoginUserAuthentication before saving. So we create both classes, populate the UserId in between saves, and if the second save fails for any reason we delete the initial LoginUser document.

I’m not sure that I like the “Twitter” string being passed around, so you can see I’ve switched to an enumerated value for Persistence and will likely refactor that back up the stack later.

These all follow naturally from the methods created for prior posts.

Wrapping Up, Next Steps

Adding Twitter as an alternative interactive login method was pretty easy, once I figured out how the Middleware worked behind the scenes. Adding a second or third method would also be relatively easy, though I would likely want to use the Middleware options to remap specific claims like “urn:twitter:userid” and the matching value for LinkedIn or others to a common set of named claims to funnel redirects into a common set of callback URls.

Next up is the final Authentication post, adding in a per-request API key/secret method that relies on revocable API keys the user will manage as additional LoginUserAuthentication identities.