How to drop a Temporal Table

by Koen Verbeeck on July 3, 2015 in category Uncategorized
Tweet

No no, I didn't say temporary, but temporal! SQL Server 2016 introduces a great new feature called Temporal Tables. Or in other words, system-versioned tables. We'll see what catches on. In a gist, such a table keeps track of the history of its rows by the use of some audit columns (start and end date) and a history table. Sounds a bit like the love child of Change Data Capture and a Type 2 dimension.

Anyway, I was testing this feature a bit (more specifically if they supported computed columns as promised in CTP 2.1) and I created a temporal table with the following query:

This code only works in CTP2.1, not in earlier versions of SQL 2016 because of the computed column specification.
Anyway, of course I forgot to set my database so this table was created in the master database. I wanted to drop it, but I was greeted with this lovely message:

Even the Delete action was missing from the table's context menu. 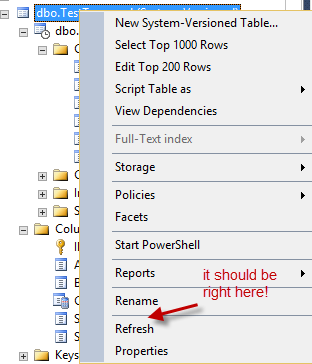 A quick look on the MSDN page Temporal Tables teaches us that dropping a system-versioned table is a disallowed Alter Schema operation. No luck there. The answer came, as usual, through Twitter:

@Ko_Ver did you try to remove temporal setting before dropping it?

Turning the system-versioning off and dropping the table is the answer to our question (and to about any schema operation you want to do on a system-versioned table). If we execute such an ALTER TABLE script, we get the following: